Summer is officially upon us and Matt has summoned the raw power of beets to create a delicious brunch alternative that is a little on the lighter side.

Beets are a unique source of phytonutrients called betalains. Beets are in fact a prehistoric food, you could even go so far as to call them ancient. They grew naturally along coastlines in Europe, North Africa, and Asia. Originally, it was the beet greens that were consumed instead of the sweet red beet root that most people think of as a “beet” in modern society. We can thank the Romans for taking the bold step of consuming the root itself.

Beet juice is known for having some impressive health benefits that include lowering your blood pressure, boosting stamina, fighting inflammation, and providing detoxification support. They are also rich in valuable nutrients and fiber. They are high in vitamin C, vitamin B, and also contain manganese. Manganese is good for your liver, bones, kidneys and even your pancreas.

Now that we’ve convinced you beets are awesome let’s get to the recipe. Start by cutting up some Roma tomatoes as seen in the video, you are basically just going to cut thicker style tomato rings. Put those on a baking sheet, dress them with Canola oil, some brown sugar and a little bit of salt. Throw them in oven and let them bake while you start the process of cooking your beets.

In a medium sized sauce pot boil your whole beets for about 20 minutes, or until they are tender. You want them to be tender so they are not not only easy to peel but easy to blend as well. After boiling them peel them and then cut them into quarters. Add your quarters to a food processor. Net you will chop some fresh garlic and add that in as well as some tahini and the juice from half a lemon. Finish off your mixture with a squirt of canola oil and blend all your ingredients together. After your initial blend add a bit of salt and blend again then put your beet blend into a bowl.

Now chop up a fair amount of curly parsley and half of a red onion and add them both to a medium sized mixing bowl. Dash that with salt and lemon juice then toss it all together well. This is the topping that will go over the top of your toast. This topping will create a crunchy, refreshing flavor that will offset the soft consistency of the beets.

Your next step will be to cut a loaf of sourdough bread into half inch slices. Grill those in a flat frying pan lightly greased with canola oil until you reach your desired level of browning. Canola oil is especially good for this type of cooking due to it’s high smoke point. Top your toasted bread with the beets, followed by the oven roasted tomatoes, and then add a layer of your onion and parsley slaw to the top. The last ingredient in this recipe is a fried egg. Any of you who have watched Matt’s videos in the past know that he is partial to fried eggs and doesn’t shy away from topping nearly any dish he makes with one, in some cases even two, fried eggs. It’s all part of the brunch experience.

If you decide to go with the egg be sure to add it prior to topping your brunch creation with the onion and parsley slaw. After putting all of your ingredients together grate a small amount of lemon peel over the top for a touch of extra zest.

For more delicious recipes and cocktail concoctions be sure to subscribe to the Fidel Gastro YouTube channel right here:

If you happen to be in Toronto stop by the Lisa Marie restaurant and experience delicacies made by the masters themselves. You can see their menu as well as the Fidel Gastro’s food truck and catering options at their website:

Also be sure to check out the Fidel Gastros Instagram: 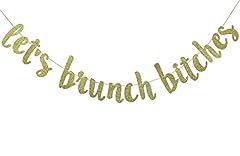 The hanging banner perfect for bachelorette dirty thirty party decor brunch decorations. Easy assembly, string through the pre-cut holes and hang them up. Size: "Let's Brunch Bitches" measures approx. 3.2ft wide, the gold string measures 9.8ft. Mater... (as of September 21, 2020 - More infoProduct prices and availability are accurate as of the date/time indicated and are subject to change. Any price and availability information displayed on [relevant Amazon Site(s), as applicable] at the time of purchase will apply to the purchase of this product.) 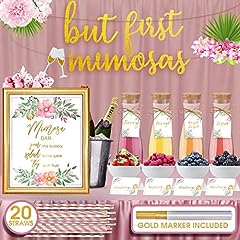 THE ONLY MIMOSA BAR SUPPLIES YOU’LL NEED: VAVO’s party decoration set includes EVERYTHING you need to set up your own mimosa bar and get the party started! With just one click, you’ll get a gold foil Mimosa Bar sign, a ‘But First Mimosa’ Banner’, 20 ... (as of September 21, 2020 - More infoProduct prices and availability are accurate as of the date/time indicated and are subject to change. Any price and availability information displayed on [relevant Amazon Site(s), as applicable] at the time of purchase will apply to the purchase of this product.) 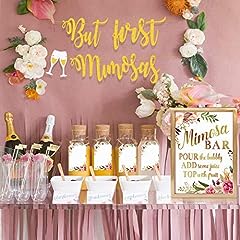 ALL-IN-ONE: The mimosa bar bundle package includes 1 Gold Glittery But First Mimosas Banner, 1 Mimosa Bar Gold Foil Sign, 4 Juice Label Tags with Strings. DOES NOT INCLUDE FRAME. MIMOSA BAR SIGN: Made with gorgeous luxe gold foil and premium pure whi... (as of September 21, 2020 - More infoProduct prices and availability are accurate as of the date/time indicated and are subject to change. Any price and availability information displayed on [relevant Amazon Site(s), as applicable] at the time of purchase will apply to the purchase of this product.) 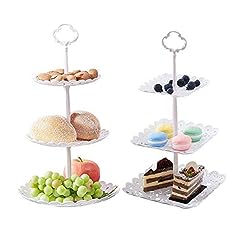 ✅FOOD GRADE MATERIAL: Safety food-grade plastic environmental protection PP material, can be used repeatedly, small and lightweight, easy to assemble. Perfect for putting mini cupcakes, crackers, strawberries, chocolates, finger sandwiches or other s... (as of September 21, 2020 - More infoProduct prices and availability are accurate as of the date/time indicated and are subject to change. Any price and availability information displayed on [relevant Amazon Site(s), as applicable] at the time of purchase will apply to the purchase of this product.)

Beets FTW! I wish more people would realize how great beets actually are.

Beets? Hmm.. I would have never thought to put beets on toast. I might have to check this out.

Is that a Hulk Hogan action figure? I haven’t seen one of those in years.

why can’t I see how many subs he has ?

I think I’m just going to eat that parsley and onion slaw by itself, but I’m going to add some white balsamic vinegar to it.

I don’t know about that sourdough but the rest of this looks like a great way to start the day.

This would be perfect to eat before I go work on my pythons at the gym bro. LOL

Roasted tomatoes and an egg? This ist perfection man.